Grow Your Calves! Learning About the Gastrocnemius

Grow Your Calves! Learning About the Gastrocnemius

Students get practice in many skills that are needed in a fitness career, including building their brand and writing content. Check out this great blog about the gastrocnemius by recent graduate Tom Marsh. He did a great job explaining the muscle and picking a few exercises that you can use to train it!

The Gastrocnemius is located on the posterior distal part of the leg and is the largest of the components that make up the calf muscle. It is a two headed muscle, like the biceps brachii, meaning that it has two origins that converge into one insertion point. The two heads are called the medial head and the lateral head, according to their position in relation to the medial plane.

It’s movement functions are to plantarflex the foot at the ankle joint and to flex the leg at the knee joint. This means when it contracts your ankle and toes point down, actions such as running and jumping use this to propel the body forward. 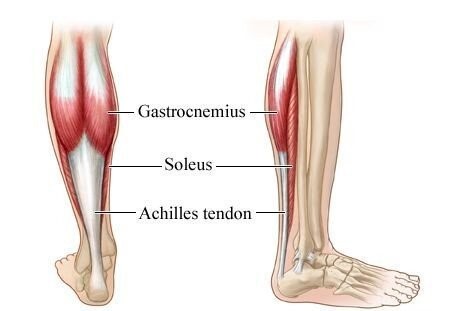 The origin of the medial head is the medial condyle of the femur and just above the condyle, whereas the lateral head has its origin at the lateral condyle of the femur and similarly just above the condyle. These two heads, then converge into one insertion point, however it does not insert onto bone or another muscle. The tendon merges with the soleus tendon to form the calcaneus tendon (known colloquially as the achilles tendon), which inserts on the calcaneus or the heel bone.

Here are three exercises that target or incorporate this muscle:

Calf raise: in particular the standing calf raise. Whilst seated, the bent position of the knee takes out the engagement of the Gastrocnemius and puts the tension onto the Soleus. The exercise is performed by standing up straight, pushing through the balls of your feet and raising your heel until you’re standing on your toes. Then lower slowly back to the start to reset your position, repeating for repetitions. The exercise can be progressed using weighted resistance, for example, whilst holding dumbbells, kettlebells or using specific standing calf raise machines.

Check out this cool video using a tennis ball to improve calf raises!

Running: repetitive and explosive plantarflexing of the foot at the ankle joint that is needed to run means that the Gastrocnemius receives repetitive stress, lengthening and shortening. Running can produce loads of between 3-8 times body weight so the extra force required will strengthen the muscle. This is why people with weak Gastrocnemius can experience calf strain whilst running, because the muscle can not handle this added load.

Here’s a video we often review in class to learn more about sprint mechanics!

Resistance Band Calf Exercise: if the calf raise is too much for a client (i.e body weight is too much load) a regression can be the resistance band.Rather than using bodyweight, this time try sitting and wrap the band around the end of your foot and press down into the band through the ball of your foot, extending your toes and engaging the calf. Relax the muscle to return to the starting position.

I currently work at the Downtown Fitness World as a Member Services Representative. Sport and exercise was something that I only picked up later in my life, which proves that it’s never too late to make a change! Although I dabbled with boxing for a couple of years in my early 20s, with two competitive matches under my belt, resistance training was something I only fell in love a couple of years ago. Being part of the team at Fitness World was an eye opener into the world of personal training and motivated me to encourage more people to see the importance, benefits and personal growth a healthy lifestyle can provide.

About the Author: Student Author